Here are the latest updates:

02:05 – Filipino doctors to Duterte: We never called for revolt

A organisation representing thousands of doctors in the Philippines has issued a new statement saying they have not called for a revolution against the administration of President Rodrigo Duterte.

The doctors also said that there was no threat from their group to leave patients “since our oath instructs us to first do no harm to anyone who needs our help.”

This after a furious Duterte, dared medical workers early on Monday to “revolt” against him, after they demanded a new lockdown order to help the spread of the coronavirus.

As of the end of Monday, there were over 106,000 cases reported in the Philippines and more than 2,000 deaths. The Philippine capital, Manila, and four nearby provinces have been placed under a new lockdown starting on Tuesday until August 18.

The number of new confirmed cases of the coronavirus in Italy has fallen below 200 for the first time in a week, with 159 new cases registered, according to AP news agency quoting the health ministry.

Lazio, the central region that includes Rome, now has the highest number of patients hospitalized for COVID-19 in Italy’s 20 regions. Health officials said nine of the region’s new cases were brought by travelers from abroad.

Two clusters of infections have also been traced to popular seaside areas near Rome. Monday figures tend to be lower since they often don’t include tallies from the weekend.

Victoria has declared a state of disaster and imposed strict lockdown following the surge in cases of the disease, also known as COVID-19.

Mexico’s health ministry has reported 4,767 new confirmed coronavirus cases and 266 additional fatalities, bringing the total in the country to 443,813 cases and 48,012 deaths, according to Reuters news agency.

The government has said the real number of infected people is likely significantly higher than the confirmed cases. 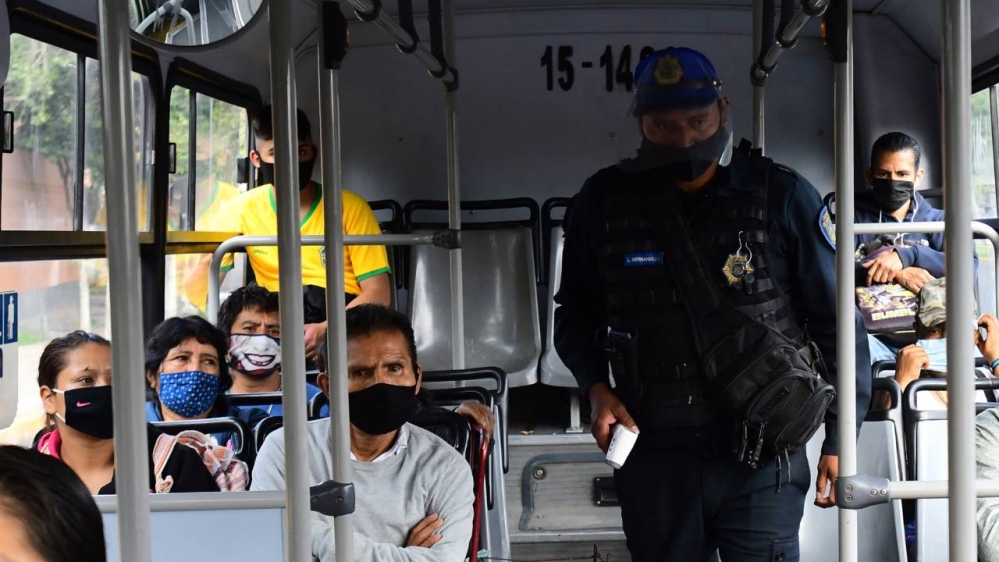 With more than 48,000 confirmed deaths, Mexico is already the third country in the world with the most deaths due to the coronavirus pandemic [Jorge Núñez/EPA]

The South China Morning Post has reported that Hong Kong is planning to build at least two temporary hospitals as part of its response to contain the spread of the coronavirus in the semi-autonomous Chinese city.

The report said that the temporary hospitals could accommodate as many as 2,400 beds.

The latest development comes as cases continue to rise over the last few days. The city has reported at least 3,589 cases, with 38 related deaths. However, the latest number of cases reported was much lower that previous days, when reported new infections hit over 100 daily.

Braga Netto is doing well and has no symptoms, according to Reuters News Agency quoting a statement from the government.

Netto will remain in isolation until a new examination and medical evaluation is carried out, and will continue to work remotely.

Last week, Bolsonaro’s wife and one of his ministers tested positive for COVID-19. Bolsonaro also contracted the disease, but his latest test showed he was no longer infected.

Latin America has broken through five million confirmed cases of COVID-19, a Reuters tally showed, underscoring the region’s position as the area of the world hardest hit by the novel coronavirus pandemic.

The more than 10,000 new cases Colombia’s health ministry reported on Monday pushed the region past the 5 million mark, a day after the Andean nation reported a record 11,470 cases.

Mexico has also racked up record numbers of new confirmed infections in recent days, registering more than 9,000 daily cases for the first time on Saturday, a day after Mexico overtook the UK as the country with the third-highest number of deaths caused by the coronavirus pandemic.

The region, which has now topped 200,000 deaths, is struggling to stall the spread of the virus, with infections picking up pace in many countries even as governments look to ease lockdowns and revive economic growth.

For all the key coronavirus-related developments from yesterday, August 3, click here.

The little talked about side-effects of COVID-19 | Opinions

In March, we predicted that the 70 million people fleeing...
Read more

What Stars are Made of: The Life of Cecilia Payne-Gaposchkin | Review

The Apple logo is seen on the window of the newly opened company store in Bangkok on Sept. 23.Photo: Mladen...
Read more

What Stars are Made of: The Life of Cecilia Payne-Gaposchkin |...