Live – follow the 2020 chemistry Nobel prize as it happens | News

9.25am An adorable prediction

This is just wonderful!

9.18am Eyes on the prize money

The Nobel prize was the biggest prize of its kind when it got going. As you can see now it’s been overtaken by some newcomers, but the Nobels is still the most prestigious science prize out there – its name recognition goes far beyond any other.

As always there’s been plenty of discussion of who or what might win the chemistry Nobel prize. The perennial favourite was John Goodenough for lithium-ion batteries and with him having won the prize last year this opens up the field for a new favourite. The new favourite among chemists on Twitter polled by Nature Chemistry’s editor Stuart Cantrill was gene-editing tool Crispr. The discovery, however, is currently at the centre of a legal battle over who discovered it, leading some to suggest that it won’t win a Nobel prize while there are still question marks over precedence.

A month tomorrow, the 2020 #chemnobel will be announced, so it”s time for the annual #chemtwitter poll! What topic do you think *will* (not should) garner the prize? (Leave comments suggesting what might win if none of the options in the poll…); RTs appreciated!

Our news story rounds up many of the predictions that have been made for the chemistry prize. This includes the return of Paul Bracher at ChemBark and Clarivate’s citation crunching approach. However, it seems like the chemistry Nobel committee often like to spring a surprise on us (quasicrystals anyone?), which always makes the announcement one of the most interesting of the three science prizes.

Last year we spent a long time wrestling with over 100 years of data from the Nobel Foundation looking at who and what wins a chemistry Nobel prize. We’ve updated it for 2020 and I’d thoroughly recommend checking it out. If you’ve ever wondered where laureates were born, the institute that can claim the most Nobelists or which Nobel prize winning paper has received the most citations then you’ll want to take a look. There’s also an awesome interactive map of the world showing where every single chemistry Nobel laureate was born and the institute they moved to to do their prize-winning work.

9.05am Diversity in the Nobel prizes

It’s the question that comes up every year – why aren’t there more women winning Nobel prizes, why do most of the prizes go to scientists in Europe and the US? Chemist Marc Zimmer has served as a consultant aiding the Royal Swedish Academy of Sciences on selection of the Nobel Prize in Chemistry in the past. Consequently, he’s well placed to talk about the problems with diversity the science Nobel prizes have. Unsurprisingly, he notes the reason there have been so few women and that winners tend to white men goes way beyond the Nobel selection committees. He notes:

‘Nomination to receive a Nobel Prize in science or medicine is by invitation only, and information about the nomination and selection process cannot be revealed until 50 years have passed. Despite this confidentiality, based on the list of laureates it’s clear that nominations tend to favour scientists working at elite research institutions, famous scientists who are good at self-promotion and those well known to their peers. Predictably, these tend to be older, established white men.’

You don’t have to be exceptionally eagle-eyed to spot in the stats below that few women have won a science Nobel prize but this data visualisation really hammers this home. That relatively few women rise to the very top in science as a whole has been a matter of debate for a long time now, yet things are still only changing slowly. The Nobel committee has responded by looking at measures to address the imbalance.

8.49am Some science Nobel stats

How does the chemistry prize compare with the physics and physiology or medicine prize on a couple of key measures?

Yesterday, the Nobel Prize in physics was awarded to Roger Penrose, ‘for the discovery that black hole formation is a robust prediction of the general theory of relativity’, and to Reinhard Genzel and Andrea Ghez ‘for the discovery of a supermassive compact object at the centre of our galaxy.’

BREAKING NEWS:
The Royal Swedish Academy of Sciences has decided to award the 2020 #NobelPrize in Physics with one half to Roger Penrose and the other half jointly to Reinhard Genzel and Andrea Ghez. pic.twitter.com/MipWwFtMjz

Roger Penrose is also known for discovering Penrose tiles – rhombus-shaped tiles that can be used to tile an infinite plane in a pattern that never repeats. Penrose tiles are linked to the 2011 Nobel prize in chemistry, which was awarded to Dan Shechtman for his discovery of quasicrystals in 1982. (I should add that there’s a lovely story, almost certainly apocryphal, of Roger Penrose having his hallway done with Penrose tiling. One of the people who supposedly laid the tiling was reported to have said the job was a complete pain, the pattern never repeated!)

Like Penrose tiles, but unlike traditional crystals, the ordered patterns in quasicrystals don’t repeat regularly. It took many years for quasicrystals to be accepted as they break many of the conventional rules of crystallography.

And back to Penrose briefly, here’s a great piece of trivia…

Back in 1997, Penrose was involved in a legal battle with the makers of Kleenex toilet roll. It turns out that the non-repeating pattern of Penrose tiles is good for making quilted bog roll that doesn’t bunch up.

‘When it comes to the population of Great Britain being invited by a multi-national to wipe their bottoms on what appears to be the work of a Knight of the Realm without his permission, then a last stand must be made,’ commented David Bradley, director of Pentaplex – a company called that produced puzzles based on the Penrose patterns.

Today’s the day! 🥳 The chemistry #NobelPrize2020 is all set to be announced at around 10:45 BST, but what do you think is going to win this year? Let us know!

8.17am Coming up this morning…

The press conference is expected to start at around 10.45am UK time (11.45am CEST), barring any problems contacting the new Nobel laureate(s). You can watch the proceedings unfold at 10.45am over on the Nobel Foundation’s website. We’ll be tweeting from @ChemistryWorld all things Nobel prize related and recommend the #chemnobel hashtag to keep up with what people are saying. If you have any tips or things you’d like to share then the best way to reach us this morning will be on Twitter.

This year the press conferences have been rather more subdued affairs as a result of the pandemic. The Royal Swedish Academy of the Sciences has been observing social distancing rules, spreading out the committee members and expert scientists and far fewer journalists are present. The Nobel award ceremony and banquet – normally in December – have been cancelled too. This is the first time the Nobel Foundation has cancelled the event since 1956, when they wanted to avoid inviting the Soviet ambassador because of the USSR’s crushing of the Hungarian Revolution. Instead the Nobel lectures and award ceremony will be conducted virtually, while it is hoped that the banquet will take place in 2021. Fingers crossed for all our sakes that things are normal enough again to run the banquet then.

Thanks for joining us this morning in the run-up to the chemistry Nobel prize. We’ll be talking all things Nobel prize related as we await the announcement and sharing our thoughts on who might win, does the prize still matter in this day and age, and what happens when you get the call from Stockholm? 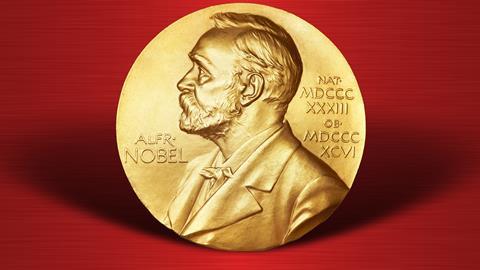 A quick recap on how things stand so far. The physiology or medicine Nobel prize went to Harvey Alter from the US National Institutes of Health, Michael Houghton at Canada’s University of Alberta and Charles Rice at the Rockefeller University in the US on Monday for the discovery of the virus that causes hepatitis C – a virus that affects 1% of the world’s population. Yesterday was the turn of physics and Roger Penrose at the University of Oxford received half the prize for his work on black hole formation, and the other half went to Reinhard Genzel at Max Planck Institute for Extraterrestrial Physics and Andrea Ghez at University of California, Los Angeles for discovering a supermassive compact object at the centre of our galaxy. The award for Ghez brings the number of women who have won a physics Nobel prize to four.

Today is the big one (for us anyway), so stick with us while we bring you the latest news, gossip and comment on the prize. We’ve also gathered all our Nobel prize stories into a single handy place for you.

WASHINGTON — President Trump has repeatedly bragged about what he has done for Black America, pointing to his administration’s funding for Black colleges...
Read more

US Senate confirms Barrett to the Supreme Court | US & Canada

In July we announced Hello Neighbor 2 – the sequel to our original stealth horror game about sneaking into your creepy Neighbor’s house...
Read more

US Senate confirms Barrett to the Supreme Court | US &...