Marguerite Perey and the last element in nature | Article

In September 2019, Katherine Shield thought she’d made the breakthrough of her career – a new, never-seen phenomenon. While experimenting with actinium-227, she had come across unusual results while performing gamma spectroscopy. ‘I was looking at spectra of one of my column separations and was like “What is this peak? This peak shouldn’t be here!”’ The strange peaks were almost – but not quite – in line with thorium, the element into which actinium decays around 98% of the time. ‘It looked like I had thorium, but the major peak wasn’t there. I was completely confused, and so I started thinking about actinium’s [radioactive] decay chains.’

Walking across her lab at the University of California, Berkeley, US, Shield checked the team’s giant tome of known spectra and realised she’d been beaten to her find by 80 years. Inadvertently, she had recreated one of the most impressive scientific feats of the 20th century: Marguerite Perey’s discovery of the last non-synthetic element, francium.

Perey was born just outside Paris, France in 1909. She had dreamed of becoming a doctor, but when her father died the family was impoverished, their only income from her mother giving piano lessons. University was out of reach. Instead, in 1929 Perey took a diploma in chemistry at the Technical School of Women’s Education in Paris, which qualified her to work as a laboratory technician. Soon after, she interviewed for a job as a personal assistant at the Radium Institute, a dark building near the Jardin du Luxembourg she found ‘melancholy and sombre’. Her interviewer was dressed entirely in black, hair tied up in a bun, her pale face behind thick glasses. At first Perey assumed it was a secretary, but to her surprise she realised it was none other than the most famous woman in France: two-time Nobel prize winner Marie Skłodowska Curie. The interview was a disaster, and Perey felt relief she would never have to set foot in the gloomy institute again. And yet, despite her misgivings, a few days later a letter arrived telling her she had been hired.

By this time there were an increasing number of women in science, although much of their contribution remains unacknowledged and often went unrecorded at the time, according to Geoffrey and Marelene Rayner-Canham, authors on a chapter on Perey in the book Women in their Element. Even so, the culture of the Radium Institute was unique. ‘The women researchers worshipped Curie,’ the Rayner-Canhams say. ‘However, by most accounts Curie was distant. The women were supportive of each other and often collaborated together. In later years, Curie had less and less to do with the day-to-day running of the laboratories. It was Catherine Chamié who Curie placed in charge.’ 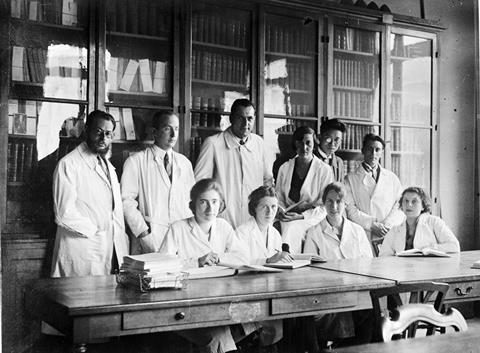 As her personal assistant, Perey saw more of Curie than the others. Her life revolved around purifying actinium from uranium ore, so that Curie could continue her studies. It was dangerous work. ‘There were no safety standards,’ the Rayner-Canhams explain. ‘[Radium Institute alumni] Sonia Cotelle mouth-pipetted a radioactive polonium solution and accidentally swallowed some, almost certainly resulting in her premature death. Many women researchers described how casually radioactive materials were handled … Marie Curie was convinced radiation was harmless or even beneficial.’ Another of Curie’s team, Elizabeth Róna, later recalled: ‘The Institute was highly contaminated [by radiation]. The staff were more concerned with the safety of the radium sources than with their own.’

In 1934 Curie died of aplastic anaemia, linked to a lifetime’s work with radioactivity. Perey was promoted to radiochemist, continuing her research with actinium under Andre Debierne, the element’s discoverer, and Curie’s daughter (and Nobel laureate) Irène Joliot-Curie. As mentioned earlier, actinium-227 almost always decays into thorium-227; but in 1938, Perey noticed the actinium sample was giving off an unexpected decay energy and found herself working until midnight, puzzling over what it was. Still a technician and only 29 years old, she requested three weeks to study her new, unidentified decay product.

In January 1939, after meticulous purification and testing, she calculated the actinium sample had alpha-decayed, losing two protons and two neutrons. She called her discovery actinium-K. It was the first sighting of element 87, at the time one of only three ‘missing’ elements (along with elements 61 and 85, later named promethium and astatine respectively). ‘I don’t even know how she did it,’ Shield says. ‘It’s a 1.5% decay branch. It’s a tiny needle in a giant haystack. I’m constantly blown away by what chemists were able to accomplish with such little instrumentation compared with what we have now.’

The feat is even more impressive given the half-life of the isotope Perey had discovered: a mere 22 minutes. ‘It beta-decays into radium,’ Shield explains. ‘To see francium, you have to be on top of your game and make your observations in a few hours, but not perfectly on top because you’ll only see actinium. What she did was weird and cool.’

Perey’s discovery was almost immediately stolen from her. On 9 January, Jean Perrin was asked to present her findings to the French Academy of Sciences. He did so, but when the discovery was reported in the press he claimed it was ‘moldavium’, supposedly discovered by his student Horia Hulubei three years earlier, and dismissed Perey’s finding as nothing more than a ‘fugitive element’. Although Perrin and Hulubei’s claim was disproven, Perey was distraught, later recalling: ‘Even if the period following my identification of francium brought certain honours, I also went through moments of tears and deceptions caused by vile traits of human character: manifestations of baseness and perfidity.’

But she was determined, and set her sights on a PhD based on her discovery. Throughout the second world war she attended the Sorbonne where, lacking an undergraduate qualification, she had to take a full bachelor’s programme before she could write her thesis. In 1946, she completed her defence and was finally credited with the discovery of element 87. At first she suggested the name catium as, given its position in the alkali metals, it would have the most electropositive cation. Joliot-Curie, worried people would associate the element with cats, asked her to pick again. Perey chose to honour her country of birth, and actinium-K became francium.

Perey continued to work at the Radium Institute until 1949. She would go on to be head of nuclear chemistry at the University of Strasbourg and was a member of the Atomic Weights Commission. She died of cancer in 1975, probably stemming from her time preparing samples for Curie. She was nominated for the Nobel prize five times but never won.

She discovered a chemical element and yet almost disappeared from history

By then, interest in francium had waned. As one of the rarest elements and most unstable elements on the periodic table it had no known applications and, after a 1960 summary by Berkeley researcher Earl Hyde, chemistry research stopped abruptly. Francium became a forgotten element, tucked away in a neglected corner of the periodic table. Its discoverer was forgotten too. ‘I didn’t know about Perey until after I found francium,’ Shield admits. ‘That’s when I went back to her original papers, which were all written in French, so I had to get people to translate them for me.’

Interest in Perey’s element is returning. In the mid-2000s, Laetitia Delmau, Saed Mirzadeh and Bruce Moyer, researchers at Oak Ridge National Laboratory, US, began to look at francium again, publishing the first papers on its chemistry after a hiatus of almost 50 years. Shield is also researching francium, trying to develop a modern separation route so experiments can be performed without actinium as an in-situ feedstock. Much of the metal’s properties remain unknown. ‘It should behave like an alkali metal,’ Shield says. ‘The data indicate that it probably does follow group 1 trends, but there have been some computational papers indicating it doesn’t really act as a cation like it should. We’re trying to get experimental data so we know one way or the other. And yes, theoretically in water it should explode – but you’re never going to get enough of it to have any cool water-based reactions!’

Beyond francium, Perey’s legacy holds an even greater lesson, argue the Rayner-Canhams. ‘She discovered a chemical element and yet [almost] disappeared from history,’ they observe. ‘In the greater view, her story stands as a testimony to all the women scientists who haven’t been as fortunate, and instead totally vanished forever from the scientific record.’

Kit Chapman is a science writer based in Southampton, UK

Kit Chapman is a science writer based in Southampton, UK, and author of Superheavy, published by Bloomsbury Sigma in 2019

A group of American researchers in Ohio has won this...
Read more

image copyrightSuppliedToxins made by microscopic algae in water caused the...
Read more

Anyone on the same Wi-Fi network can force websites to launch, with no user interaction. Source link
Read more

Following the news that Bethesda is being acquired by Microsoft, VP Pete Hines weighed in on why this move was the right one...
Read more

The numbers: The debt burden on the U.S. economy increased at a record pace...
Read more

As Indigenous Mapuche conflict escalates, some hope the writing of a new constitution could lay the groundwork for reconciliation and peace in the...
Read more

STEM is dope. That’s the simple message that Justin “Mr. Fascinate” Shaifer evangelizes to young people around the world. Through social media and other...
Read more