The unfolding Sars-2-CoV outbreak is laying bare the world’s need for effective antivirals. According to University of Lille chemist Sabine Szunerits, ‘we should invest in this now, knowing that viruses will be an issue in the 21st century’. With this in mind she and collaborators at the Pasteur Institute in Lille, France have, over the past few years, been developing a new approach to tackling viruses – including coronaviruses – that takes advantage of the unique properties of nanoparticles.

There are only a handful of approved antiviral treatments and these are only effective against a few specific viruses. This means that when new viral diseases like Covid-19 emerge doctors are left trying to repurpose existing antivirals in the hope that they will have an effect on the new disease.

Viruses are not technically alive, they are packages of RNA or DNA that can only replicate by hijacking its host’s genetic machinery. Antivirals do not destroy these packages, they are small molecules designed to block viral replication, thereby reducing symptoms and infectivity while the immune system deals with them. Unfortunately, because viruses rely on the host’s DNA replication machinery finding drugs that only target and bind specific virus proteins and not those of the host cell is a challenge. This lack of specificity means large doses of antivirals are often needed to achieve the desired effect, which in turn increases toxicity.

The field of nanomedicine, however, has been exploring how nanoparticles can overcome some of these problems. The promise of nanoparticle antivirals comes from their multivalency – the number of interactions occurring as molecules bind together. The nanoparticle of choice for Szunerits are carbon quantum dots (CQDs) which are spherical, have a high surface-to-volume ratio and are smaller in size than viruses creating conditions where multivalent interactions can play a role. The surface of the CQDs can also be coated with molecules that bind the proteins viruses use to enter cells. The spherical shape and smaller size of the CQD mean these molecules can form extremely tight multivalent bonds with proteins all over the virus’s surface, blocking it from attaching to and infecting a host cell. Szunerits and team started this work in 2018, testing the ability of CQDs with boronic acid groups to reduce the infectivity of a mild strain of human coronaviruses in cell lines. They achieved significant reductions in viral entry relative to controls and are now working on CQDs coated with Middle East Respiratory Syndrome (MERS) specific peptides, showing that CQDs should be able to be adapted to specific viral threats. 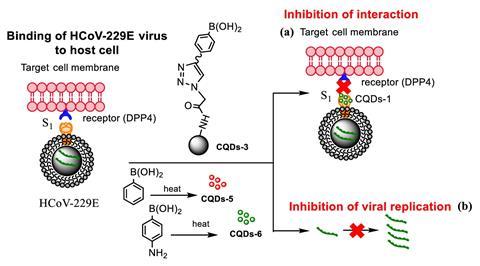 Cameron Alexander at the University of Nottingham, who works with nanoparticle-based RNA vaccines sees the potential adaptability of this type approach. ‘Once you’ve got a nanoparticle with the right spacing and chemical functionalities to match one virus, it’s not inconceivable to think how you could plug and play different groups on that surface to find another virus.’

Igor Medintz, a senior scientist with the US Naval Research Laboratory in Washington DC, agrees that the plug and play nature of this approach is promising because, as long as a molecule is biocompatible, there are few limitations to the options available. ‘There’s a huge library of non-natural amino acids that can be accessed as well – you can synthesise peptides with just about any chemical or functional group possible and those could give them very high binding affinity beyond the naturally occurring ones,’ he says.

Another drawback of current antivirals is that they are often insoluble making administering them more difficult. ‘Often drugs on the market are rather hydrophobic and the pharma industry always likes delivering drugs orally,’ says Szunerits. Nanoparticles like CQDs are hydrophilic, however, allowing them to circulate better. Due to their size, they are also easier to deliver as a fine spray, which for infections that affect the lungs, such as coronaviruses, would be more effective.

Right now, Szunerits and the team are experimenting with liposome packages to deliver CQDs, as well as assessing the big question of how the body will handle them once they’ve serve their function. Early studies by her group have shown that CQDs injected into mice are passed in urine, which along with in vitro toxicity studies provide hopeful signs that the body can tolerate them.

As with any new treatment moving from the lab to clinical trials and then scaling-up production is a long road. According to Alexander, making these types of particles is easy enough but ensuring uniformity in large batches required for a therapeutic becomes problematic. ‘When you’re making some of these systems, you need to check that the size is correct, the functionality is correct and the more functionality you put in it, the more complicated they are to characterise,’ he says. ‘The more complicated to characterise, the harder it is to get regulatory approval, and the harder it is to manufacture.’

Is there life on Venus? | Opinion

The news that phosphine has been detected in Venus’s upper...
Read more

WASHINGTON — A deal intended to address the Trump administration’s concerns about TikTok’s ties to China was complicated on Monday by a disagreement...
Read more

Recently the Federal Housing Finance Administration (FHFA) — conservator of Fannie Mae and Freddie Mac — extended the moratorium for both evictions and...
Read more

Microsoft this morning has just announced plans to acquire ZeniMax Media, the parent company of Bethesda Softworks, one of the largest, privately held...
Read more

The Cruise Lines International Association, of which Disney Cruise Line is a member, announced a set of health protocols that they plan to...
Read more

The COVID-19 lockdown is squeezing real estate from all sides and...