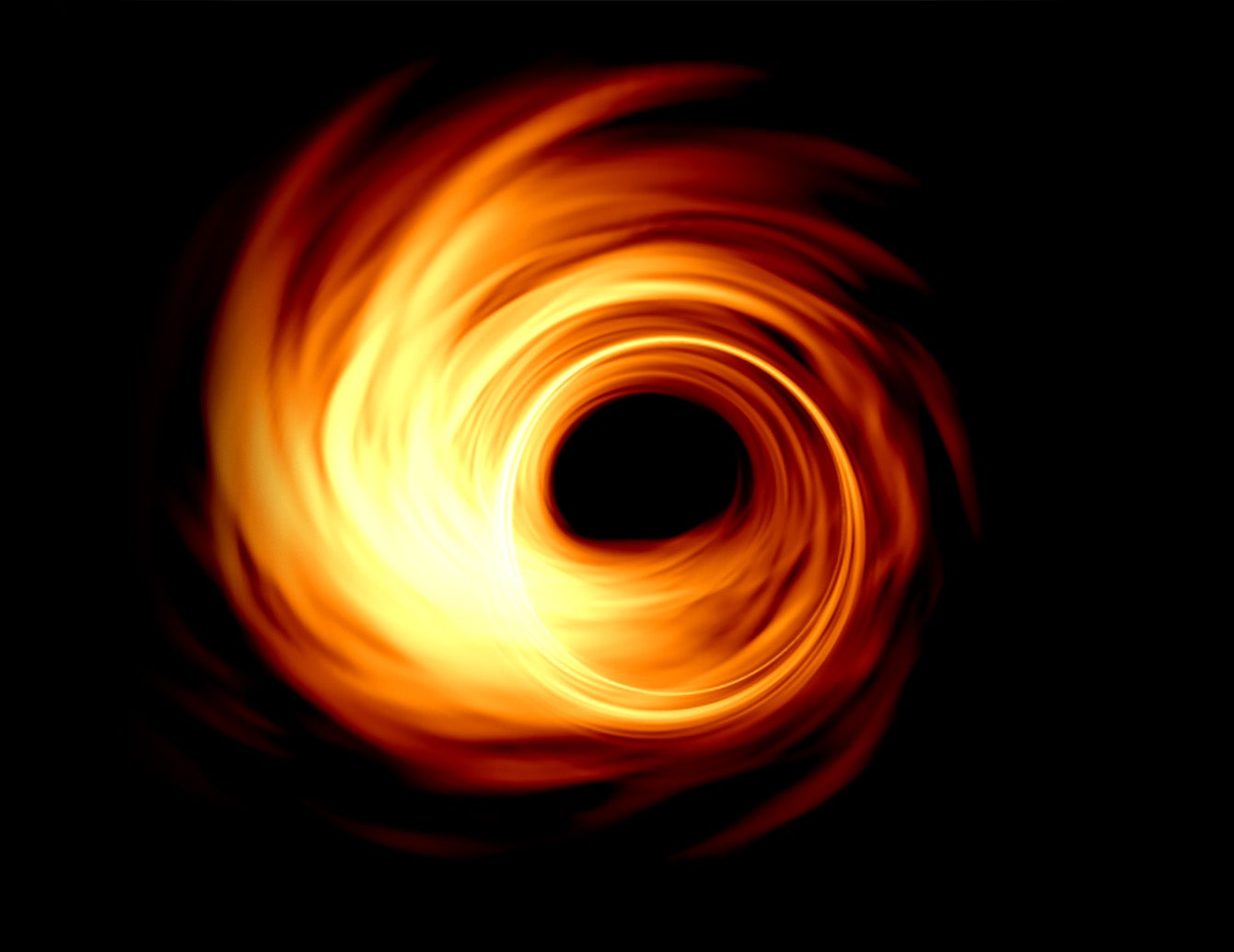 As the carnage of the Eastern Front raged around him, a German lieutenant in World War I digested Albert Einstein’s new theory. Less than two months after Einstein published his general theory of relativity, Karl Schwarzschild, who had enlisted despite being older than 40 and a physicist, found a way to use it to describe the spacetime of a spherical, nonrotating mass such as a stationary star or planet. Hidden inside Schwarzschild’s work was an implication that hinted at the ultimate warpers of spacetime: black holes. He was just 42 when he died months later, in May 1916. But the quest Schwarzchild started has continued for a century, eventually leading to this year’s Nobel Prize in Physics.

The 2020 prize was awarded to mathematical physicist Roger Penrose for his “discovery that black hole formation is a robust prediction of the general theory of relativity” and to astrophysicists Andrea Ghez and Reinhard Genzel “for the discovery of a supermassive compact object at the center of our galaxy.” It is the first Nobel given specifically for black holes—an acknowledgement of their unmistakable existence (notwithstanding the hedging in the language of the second half of the award). “Nowadays we take these things for granted,” says Leo Stein, a physicist at the University of Mississippi. “We’ve come so far that, at least within our astrophysical community, we think, ‘Of course there are black holes.’”

But it was not always so. For decades the concept of black holes was no more than a mathematical aberration. In the years following 1916, Schwarzschild’s solution caused interest and some consternation among mathematicians and physicists. His work predicted a “Schwarzschild radius”—a radius that denotes how compact an object would need to be to prevent light from escaping its gravitational pull. The sun, for example, has a real radius of nearly 700,000 kilometers, but its Schwarzschild radius is only three kilometers.

Spacetime curves by an amount relative to an object’s Schwarzschild radius divided by its actual radius. The closer the two values are, the more spacetime bends. So what happens when the object’s radius is equal to its Schwarzschild radius? And what happens if an object’s radius is zero? The answers to those questions were known as singularities—undefined solutions equivalent to dividing by zero on a calculator. At a singularity, spacetime seems to bend to a breaking point.

In the next few decades, physicists made some progress, but the search was mostly a mathematical diversion with no ties to the real world. The exotic—and, at the time, entirely theoretical—objects suggested by Schwarzschild’s work could be as heavy as the sun but smaller than Central Park or, stranger yet, contain a star’s mass within a radius of zero. “People thought, ‘Okay, this is just fanciful. We’re completely outside of the realm of where our physical theory should apply,’” says Frans Pretorius, a physicist at Princeton University.

In the 1960s Schwarzschild’s solutions started to seem more relevant. Astronomers began to observe extreme phenomena, such as distant galaxies spewing jets of particles at energies and amounts impossible for a normal star (dubbed “quasars”—short for “quasi-stellar objects”—these energetic eruptions were eventually traced to feasting supermassive black holes). At the same time, theorists began to model the dynamics of ultracompact cosmic bodies, finding clever ways to avoid the pitfalls associated with singularities. Penrose, then a young mathematician with a keen interest in astrophysics, was in an optimal position to help scientists stymied by the math.

“[Physicists] would argue. They would get answers that didn’t agree with each other,” says Daniel Kennefick, an astrophysicist and historian of science at the University of Arkansas. “It turned out the reason was that they didn’t really understand the structure of infinity, and Penrose solved that problem.”

To deal with the complexities of general relativity where spacetime curved in the extreme, as with objects the same size as their Schwarzschild radius, Penrose came up with a set of mathematical tools. In particular, he introduced the mathematical notion of “trapped surfaces” that allowed physicists to confidently pinpoint an event horizon—the point at which even light can never escape the inexorable tug of gravity. (The event horizon of a nonrotating black hole is located at its Schwarzschild radius.) Event horizons helped deal with the trickiness of singularities by putting an inescapable barrier around them. “We really don’t like having singularities,” Stein says. “In fact, we could cut out the inside of the black hole spacetime and replace it with … pink elephants or what have you. And from the outside, you would never be able to tell the difference, because it’s all hidden behind the horizon.” Penrose’s idea of “cosmic censorship” was that there could be no “naked” singularities: all of them would have to be “clothed” by an event horizon. Even when black holes crashed together and merged, the singularities—or pink elephants—would remain hidden by their event horizons, preventing their existence from throwing the outer cosmos into chaos.

A fascination with geometry and artists such as M. C. Escher also led Penrose to develop powerful, intuitive diagrams that captured dynamics of spacetime that were previously out of reach. His diagrams compacted space and time, placing infinities on the page instead of having them stretch off into the distance. “Once it’s on the page, you can study it,” Kennefick says. “Penrose was a tool maker par excellence. He invented many of the tools that were used in that period to understand black holes and that we still use today.” By the end of the 1960s, the term “black hole” had become the accepted nomenclature to describe these hypothetical—but now much less improbable—consequences of general relativity.

It is hard to pinpoint exactly when a majority of physicists became believers, but by the mid 1990s, black holes were taken for granted even without direct observations of them. Some of the most concrete evidence would come from Ghez’s and Genzel’s separate work on Sagittarius A*, the then suspected supermassive black hole at the center of the Milky Way. “Often, when we’re interpreting astronomical observations, there’s some wiggle room for some other possibilities,” says Suvi Gezari, an astronomer at the University of Maryland, College Park. “What’s so beautiful about our galactic center is that the measurements don’t allow for any other possibility than a four-million-solar-mass black hole.”

To arrive at that level of precision, Ghez and Genzel each independently led teams that spent more than a decade following the path of S02, a star with a short elliptical orbit around Sagittarius A*. In the 16 years it took for S02 to orbit the galactic center, the researchers dramatically improved their telescopes’ measurements with a technology called adaptive optics, which uses lasers to correct for blurriness caused when light travels through Earth’s atmosphere.

By the time S02 made a complete orbit around a dark patch of nothing, the existence of black holes could not have been clearer. Since then, astronomers have made other direct observations of black holes.

In 2012 Gezari led a team that observed, with unprecedented detail, a tidal disruption event—a tame name for a black hole ripping apart the entrails of a star that got too close. A stellar homicide in another galaxy looks a bit like a brighter, longer supernova, thanks to the rest of the star being flung apart. “I used to call it the ‘fingerprints’ of the victim—which, in this case, is the star,” Gezari says.

More events, such as the merger of two black holes and the ensuing gravitational waves captured by the Laser Interferometer Gravitational-Wave Observatory (LIGO) and the Virgo experiment, have given further proof that these objects exist. But perhaps the most stunning evidence thus far is the Event Horizon Telescope’s (EHT’s) image of a supermassive black hole with billions of solar masses at the center of the galaxy Messier 87 (M87). The now iconic image of a black circle ringed with the intense light of an accretion disk the size of our solar system has eliminated any room for doubt.

These observations of black holes and their shadows are more than just confirmations of Einstein’s theory. As the EHT’s resolution increases, it will test the very theories that first predicted their existence. “Black hole shadows are a good test in that alternative theories predict something different than what general relativity predicts,” says Feryal Özel, an astrophysicist at the University of Arizona and the EHT.*

Earlier this month, by carefully scrutinizing the shape of the shadow seen by the EHT, Özel and her colleagues made some of the most precise measurements of general relativity. So far those measurements agree with predictions, but it is possible that with more precision, deviations from general relativity that hint at a deeper underlying theory will show up.

For astronomers, astrophysicists and mathematicians, black holes are, by turns, monstrous and beautiful; they are extraordinary in their physics but ordinary in their ubiquity. They continue to attract researchers hoping to unlock new secrets of the universe. For a watching public, there is some appeal, too. Evolutionary biologist “Stephen Jay Gould famously wondered, ‘Why have dinosaurs become so popular?’ and argued that it isn’t obvious that they should be,” Kennefick says. Black holes, he suggests, have some of the same features as dinosaurs: they seem big, they eat things, and they’re a little terrifying—but comfortably far away.

*Editor’s Note (10/8/20): This sentence has been edited after posting to correct Feryal Özel’s affiliation.

Netflix has released an official trailer and key art for their upcoming highly anticipated series, The Liberator. The four-part animated miniseries, based...
Read more

The COVID-19 pandemic, coupled with an explosion in the number of connected devices, have led to a swelling in IoT infections observed on...
Read more

Annual Passholders Can Get a Discount at Two Disney Springs Restaurants on Mickey’s Birthday!

The Washington State Department of Agriculture plans to try to eradicate the Asian giant hornet nest on Saturday.Scientists in the northwest United States...
Read more

The US Department of Transportation (DOT) has tentatively approved a joint venture application by Delta Air Lines and Canada’s WestJet for transborder travel,...
Read more