President Donald Trump downplayed the continuing risk of the coronavirus in the United States and pressed his case for reopening schools on Tuesday.

“What we want to do is get our schools open,” Trump said at a White House event attended by First Lady Melania Trump, Vice President Mike Pence and education and public health leaders.

“We are very much going to put pressure on governors and everybody else to open the schools to get them open,” Trump said.

Trump cited advances in therapies for COVID-19 and asserted deaths from the virus are declining even as the numbers of confirmed cases have surged across the southern US from Florida to California.

As the coronavirus pandemic hit the US in March, states and localities nationwide shutdown public and private schools affecting more that 55 million students. Now authorities are trying to figure out how to reopen for the next school year.

“We can reopen our schools safely with what we know,” said Health and Human Services Secretary Alex Azar, citing forthcoming therapeutics now being tested.

In a conference call with US state governors, Education Secretary Betsy DeVos on Tuesday assailed plans by some local districts to offer in-person instruction only a few days a week and said schools must be “fully operational” even amid the coronavirus pandemic. Anything less, she said, would fail students and taxpayers.

DeVos made the comments during a call with governors as the Trump administration launched an all-out effort to get schools and colleges to reopen. Audio of the call was obtained by The Associated Press.

“Ultimately, it’s not a matter of if schools need to open, it’s a matter of how. School must reopen, they must be fully operational. And how that happens is best left to education and community leaders,” DeVos told governors. 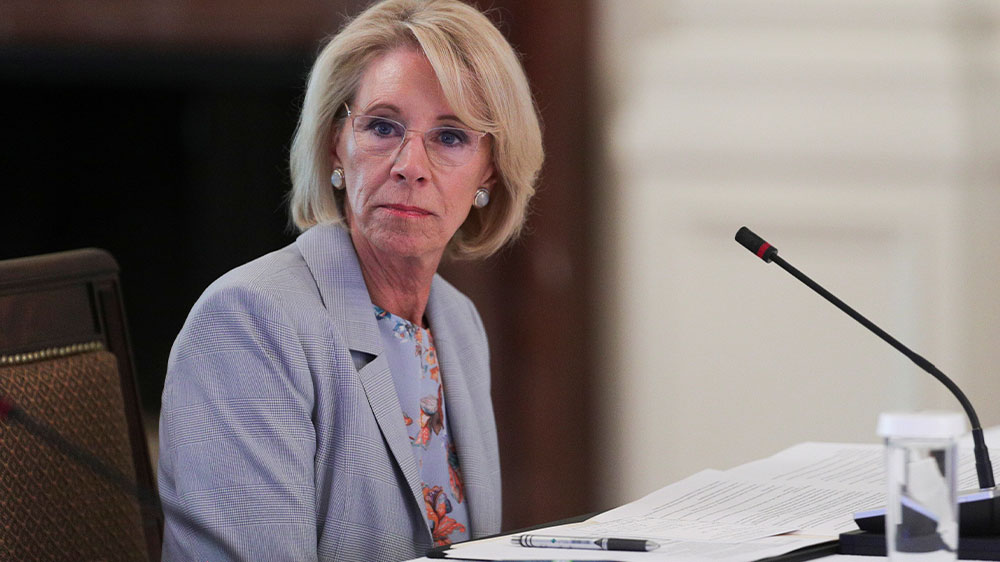 Harvard University announced July 6 that its freshman class will be invited to live on campus this fall, while most other undergraduates will be required to learn remotely from home. Harvard officials decided to allow only 40 percent of undergraduates on campus in an effort to reduce density and prevent the spread of COVID-19. All classes will be taught online, however.

“I see that Harvard announced that they’re closing for the season or for the year. I think it’s ridiculous. I think it’s an easy way out. They ought to be ashamed of themselves,” Trump said.

Trump has insisted that schools and colleges return to in-person instruction as soon as possible. He said Monday on Twitter that Democrats want to keep schools closed “for political reasons, not for health reasons”.

“They think it will help them in November. Wrong, the people get it!” Trump tweeted.

SCHOOLS MUST OPEN IN THE FALL!!!

The Centers for Disease Control and Prevention put out guidance for schools last month, including staggering schedules, spreading out desks, having meals in classrooms instead of the cafeteria, adding physical barriers between bathroom sinks and cleaning and disinfecting surfaces.

In the call with governors, DeVos slammed districts that plan to offer in-person instruction only a few days a week. She called out Fairfax County Public Schools, which is asking families to decide between fully remote instruction or two days a week in the classroom.

“A choice of two days per week in the classroom is not a choice at all,” DeVos said, noting that the district’s distance learning last spring was a “disaster.”

DeVos said she was disappointed in schools across the US that “didn’t figure out how to serve students or who just gave up and didn’t try”. She said several state education chiefs told her that they also were disappointed in districts that did “next to nothing to serve their students”.

The same thing can’t happen again this fall, she said, urging governors to play a role in getting schools to reopen.

“Students across the country have already fallen behind. We need to make sure that they catch up,” DeVos said. “It’s expected that it will look different depending on where you are, but what’s clear is that students and their families need more options.”

“We don’t want people to make political statements or do it for political reasons, or think it’s going to be good for them politically, so they keep the schools closed. No way,” Trump said.

The Immigration and Customs Enforcement (ICE) branch of the Department of Homeland Security issued new rules on July 6 saying international students must leave the US if classes are online.